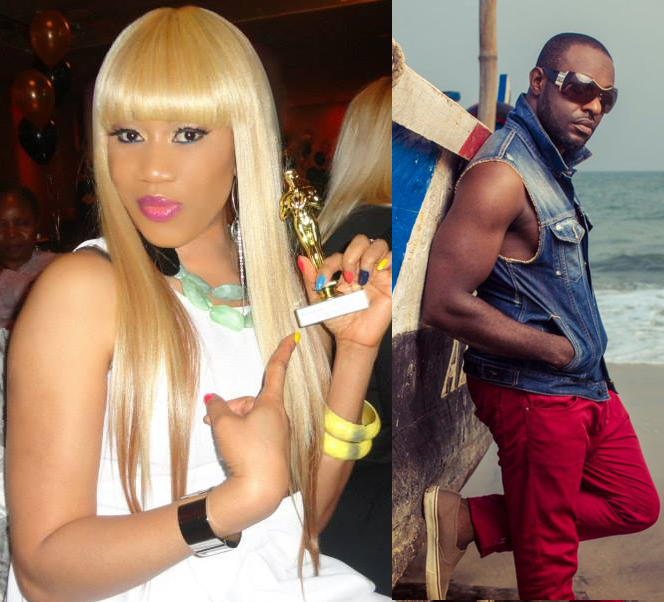 Ruth Okoro is Ini Edo's husbands ex..Back then,she che claimed Ini Edo snatched her husband .Now, she is spilling the dirt on Jim Iyke.Says he tried to date her and also dates American girls because he needs a green card....
Jim Iyke looks like he's at a good place in his life now..don't know why there's suddenly alot of drama surrounding his name ..
Read her email sent to blogs below..

"In 2005 Jim Iyke started heating on me when I refused his advances and reported him to my husband, Philips Ehiagwina, now Ini Edo’s husband. Jim Iyke tried to talk me out of telling my husband and when I insisted he got upset and decided to set Emeka Ike up because Emeka Ike is the only person I confided in and when I was invited to Maryland to feature in a movie, alongside Keturah Hamilton, Emeka Ike was there and I always confided in him and asked questions. Emeka Ike and his wife Emma have been my friends for over 11 years now, I visited them when I visit Nigeria.
Jim Iyke made lofty promises to me trying to win my heart and he never expected me to say no so when I did he tried to convince me telling me that the man I claim to love so much and brought to the United States has been cheating on me with everything in skirts. (Philips Ehiagwina) an Edo man I met in Nigeria in 1998 and sacrificed all to ensure he has a good life.Jim Iyke told me all that my husband was and is still doing to me in my absence, even got Ini Edo the actress pregnant.

At the moment, I have confirmed all Jim Iyke told me about my husband. One of my husband’s mistresses Nkiru who lives in Houston, Texas set him up after she found out that my husband betrayed his wife (me) and lied to me. She decided to set him up with an audio coverage and got every prove, he confessed about playing me for a green card on tape.
At d moment he has a case with the United States Immigration and the FBI is also on this case. It is a very long story. I have decided to speak to the press and bring the truth to the table at this moment.
It’s very unfair that Jim Iyke who knows the truth but afraid to face it could be so callous to accuse an innocent person like Emeka Ike who has been nothing but a big brother to me since I’ve known him.
I was very upset about it and and fought for the truth. My husband met me as a virgin and took my virginity on a night of our honeymoon. for him to paint a bad picture of me simply because I reported his green card fraud to d FBI since he has refused to confide in me is something I never saw coming but I will fight to d end.

Jim Iyke has tried dating several girls just to obtain a green card, one of d girls he dated confessed that he tried to get her pregnant and when she said no Jim Iyke decided to spend her money with promises of everlasting love and then left her for another person. Now he is dating a Jamaican girl ( Keturah Hamilton) who just got her green card few months ago after marrying for a green card. She is also a male magazine model who strips naked for male magazines.
Those supporting Jim Iyke right now should know he destroyed my marriage. Jim Iyke is evil, very vicious. It was a good thing that he got exposed. Keturah Hamilton is a loser. She has no means of livelihood. She strips for clubs and that is. Good riddance to bad rubbish. Jim Iyke framed Emeka Ike and me up. Keturah Hamilton was there. Jim Iyke is a home wrecker, who just got served! He came back because Keturah just became an American citizen. It is all about getting a green Card.