Happy birthday to the Lovely @ritadominic as she steps into another year with blessing!!! 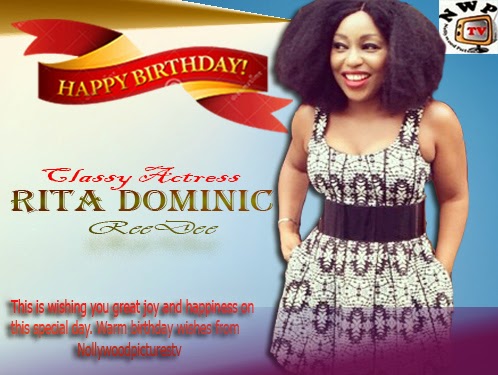 On this special day, we wish you all the very best, all the joy you can ever have and may you be blessed abundantly today, tomorrow and the days to come! May you have a fantastic birthday and many more to come... HAPPY BIRTHDAY ReeDee!!!! From all of us +Nollywoodpicturestv ..Read her biography bleow

Rita Uchenna Nkem Dominic Waturuocha is a Nigerian actress.
Rita Dominic is a member of the Royal Waturuocha family of Aboh Mbaise local government area in Imo State.] She is the youngest of 4 siblings. Her late parents were medical practitioners; her father was a medical doctor and her mother a nursing officer.Dominic attended the prestigious Federal Government College, Ikot Ekpene, Akwa Ibom State, Nigeria, before heading to the University of Port Harcourt, where she graduated with a BA (Honours) Degree in Theatre Arts in 1999.
Dominic started performing when she was a child, appearing in school plays and children's television shows in Imo state. In 1998 she starred in her first movie A time to kill.She won the City People Awards in 2004 as the Most Outstanding Actress. She has starred in over 100 Nollywood productions, Watch Rita Dominic In This movies