N225m car scandal: Stella Oduah tells her own side of the story 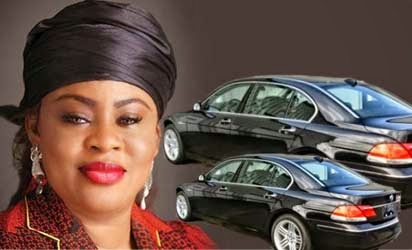 Minister of Aviation Stella Oduah has responded to President Jonathan's query to her to explain her role in the purchase of the controversial N225million BMW armored cars. See her response below

Executive summary on the procurement of NCAA operational vehicles
“The Nigerian Civil Aviation Authority, NCAA, is the statutory regulator of the Nigeria Civil Aviation Industry.

Consequently, the NCAA is charged with oversight responsibilities over all civil aviation operations in the country, including safety, security and strict compliance with ICAO Standards and Recommended Practices, SARPs, and Nigerian Civil Aviation Regulations, NCARs.

2. Towards the effective implementation of its statutory regulatory responsibilities, therefore, it is imperative that the NCAA is fully equipped with highly specialised tools and facilities, including adequate operational vehicles to cover all 22 national airports and over 400 airstrips. In keeping with standard practice, provision is therefore made annually for the replacement of obsolete, inadequate & unreliable monitoring equipment.

3.In the 2013 budgetary appropriation, provision was made for the procurement of specialised equipment (including operational vehicles) to complement and in some cases replace obsolete ones.

Furthermore, the fact that NCAA, as the regulator of the industry, often plays host to dignitaries from ICAO, IATA, US FAA, AFRAA, AFCAC BAGASO, CANSO, ACI and a host of others makes it necessary to have specialised operational vehicles.

4.With regard to the procurement of additional operational vehicles (including BMW Security Vehicles), the following due process was observed:
(I) By letter dated April 15, 2013, NCAA officially requested authorisation from the Federal Ministry of Aviation to procure 56 operational vehicles through lease financing. This option was proposed to the ministry to enable the NCAA make 36 monthly payments based on receipts from Internally Generated Revenue, IGR.


The Ministry therefore granted due approval.
(ii)Based on the ministry’s approval, the NCAA invited Expressions of Interest from all Banks in Nigeria for the financing of the said vehicles. EOI was adopted because the procurement is two sided. First, the financier would have to be selected before the supplier is determined. This is in line with procurement best practices.
(iii) On May 24, 2013, the response received from the various banks to the Expression of Interest, EOI, request was opened publicly and minutes of the opening exercise was duly documented. During the EOI opening exercise, NCAA got commendation from one of the Civil Society Organisations, CSOs, approved by BPP who were invited for the opening exercise.
(iv)  The evaluation of the expression of interests was held on May 31, 2013 during which First Bank Plc, Union Bank Plc and Stanbic IBTC emerged most responsive. On the June 10, 2013 the above three banks were invited to submit Financial Proposals. Thereafter, First Bank emerged the highest rated responsive bidder.
(v)Between June 20 and 25, 2013, invoices were received from various accredited motor vehicle dealers during which only Coscharis Motors Limited quoted for BMW Security Vehicles.

(vi) On June  28, 2013, NCAA Parastatal Tenders Board approved the selection of First Bank Ltd for the Lease Financing as well as Metropolitan Motor Vehicles and Coscharis for the supply of the vehicles.  All  necessary approvals  were duly  sought  and  obtained accordingly.

Your Excellency is respectfully invited to note:
(i) The crucial statutory role of the NCAA in regulating civil aviation operations in the country, including safety, security and strict compliance with ICAO Standards and Recommended Practices (SARPs) and Nigerian Civil Aviation Regulations (NCARs).
(ii) The need for NCAA to be fully equipped with highly specialized tools and facilities (including operational vehicles) to enable the effective implementation of its statutory functions.
(iii) The procurement of specialized operational vehicles is duly provided for in the NCAA 2p 13 (IGR) Budget and the need for adopting instalmental lease payments over36rionths.
(iii) That Due Process was followed in the procurement of the said operational vehicles.